It is worth remembering at this point that many of the men featured on this list were despised by their own citizens and that some of their actions may have been embellished, if not completely fabricated after their deaths. With that said, these men were hated for a reason.

Gaius Julius Caesar Augustus Germanicus, better known to history by his nickname “Caligula” (the name translates as “Little Boots” and was provided by his father’s troops who took great joy in watching the young boy march around with them) was selected to be emperor by his great uncle Tiberius.

Initially, the empire rejoiced at the accession of the young Caligula. For the first seven months or so, he was loved by all. He paid handsome bonuses to the military, to get them on his side, and recalled many whom his predecessors Augustus and Tiberius had exiled. In October 37 he became seriously ill and it was not the young, beloved emperor that emerged but rather one of the most reviled and evil men in human history. Caligula has been accused of some of the most disgusting, insane, and explicitly depraved crimes against humanity…and most of them are more than mere accusations!

The young despot began ordering the murder of anyone who had ever dared to cross him, or even disagreed with him on mundane matters. And Caligula had a very good memory. He exiled his own wife, and proclaimed himself to be a god, dressing up as Apollo, Venus (a goddess), Mercury and Hercules. He demanded that everyone refer to him as divine whilst in his presence.

Whilst he was a boy, a soothsayer told Caligula that he had no more chance of becoming emperor than riding a horse across the Gulf of Baiae. As an adult, Caligula had a pontoon bridge built across the Gulf, put on the breastplate of Alexander the Great, and paraded night and day across the makeshift bridge. Another mad thing that he did was attempt to have his favourite horse, Incitatus, instated as a consul in an effort to belittle the politicians of Rome.

One story has it that a citizen once insulted him to his face in a fit of rage. Big mistake! Caligula responded by having the man tied down and beaten with heavy chains… every day… for three months. The man was brought from the dungeon and beaten, until Caligula was too offended by the smell of the man’s gangrenous brain, whereupon he was beheaded.

Perhaps the most sickening act that Caligula is accused of was to have another insulter and his entire family publicly executed one after another in front of a crowd. The man and his wife were first, followed by the eldest child down. The final member of the family was a 12-year-old girl, who having just watched her entire family killed was almost spared as one onlooker shouted that she should be exempt from execution as she was still a virgin. Caligula ordered the executioner to rape her and then strangle her.

The people of Rome were finally spared the evil man’s tyranny when he was murdered by the Praetorian Guard and some senators after his announcement that he was going to move to Egypt where he wished to live as a living god. The prospect of Rome losing its emperor and thus its political power was the final straw for many. Such a move would have left both the Senate and the Praetorian Guard powerless to stop Caligula’s repression and debauchery. Imagine how ruthless he would have been without a leash!!

Nero is perhaps the most well-known of the bad Roman emperors, and the one that we love to hate the most. He was, however, a rather competent administrator, and was aided in his stewardship of the Empire by some very able men, including his tutor: the writer and philosopher Seneca the Younger.

However, Nero did not always use his capable managerial skills for the good of the people and he was, unquestionably, a murderer, starting with his step-brother Britannicus, with whom he had been supposed to share power, and moving through his wife, Octavia, whom he deserted for his lover, Poppaea. Octavia was executed on trumped-up charges of adultery. Next on the hit list was his own mother, Agrippina. The initial attempt, using a collapsible boat, failed so Nero sent an assassin to finish the job. Her last words, supposedly, being “Smite my womb”, the implication being that the first part of her to be destroyed should be the part that gave birth to the vile emperor. Once Poppaea was with child and married to Nero he kicked her to death in a fit of rage!

Contrary to myth, Nero did not start the Great Fire of Rome, nor did he ‘fiddle’ (his instrument of choice was the lyre anyway), while the city burned. The truth is that Nero organised relief work for the victims. However, this brief popularity rapidly gave way to intense hatred after he built his huge “Golden House” complex (including the Colossus of Nero – a 30-metre bronze statue himself) in the ruins of what had been the public area of central Rome, destroyed in the fire, which he paid for by heavily taxing the populace.

Nero was terribly fond of his own music and poetry. He forced senators to sit through his own endless and talentless recitals which they were awfully embarrassed with; entertainers in Roman society were viewed as the lowest rung of non-enslaved society and it was viewed as very unfitting for the emperor to be performing these lowly arts.

Nero was finally toppled by an army revolt and he committed suicide (or rather got his private secretary to do the deed) uttering the words “Qualis artifex pereo” (“What an artist dies with me”) whilst he paced up and down preparing for death. 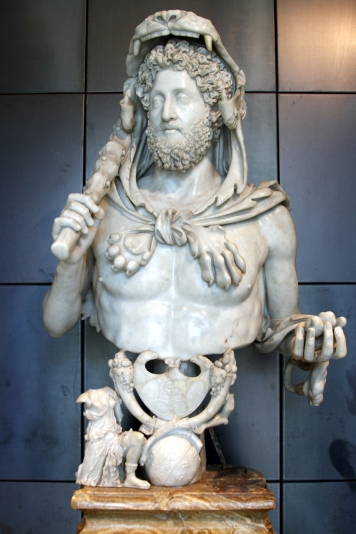 Commodus was the son of Marcus Aurelias, the Philosopher and last of the rulers traditionally known as the Five Good Emperors. Unfortunately for the people of Rome who had just experienced eighty plus years of “good” leadership, the apple fell far from the tree with this one.

Commodus was a debauched, corrupt megalomaniac who viewed himself as the reincarnation of the Greek god Hercules and had himself portrayed as such in countless statutes. However, Commodus was said to be lazy, leading a life of idle debauchery who surrendered his palace to his friends and Praetorian Prefects, who then in turn sold imperial favours.

In 192 he renamed the city of Rome ‘Colonia Lucia Annia Commodiana’. The months of the year, the legions, the fleet, the senate, the imperial palace, and the citizens of Rome themselves were all renamed after him too.

His love of the games was such that he disgraced his royal status by performing like a slave in the arena, slaughtering hundreds of exotic animals such as ostriches, elephants and the ferocious giraffe. Commodus, the emperor, also fought gladiators who had been handicapped (think of Joaquin Phoenix’s portrayal of the character in the film Gladiator where he stabs Russell Crowe’s Maximus before the fight) and dared not triumph anyway. Commodus charged the state a massive fee for each appearance. This ridiculous spectacle horrified the populace and ultimately led to his demise.

When Commodus revealed that he intended to celebrate the rebirth of Rome by fighting in the arena on New Year’s Day in 193, his mistress and advisors attempted to talk him out of it. When they were unsuccessful, his mistress, Marcia, attempted to poison him. When the poison failed, Commodus’ fitness coach, Narcissus, choked the emperor to death whilst in the bath the day before the games on December 31 192. 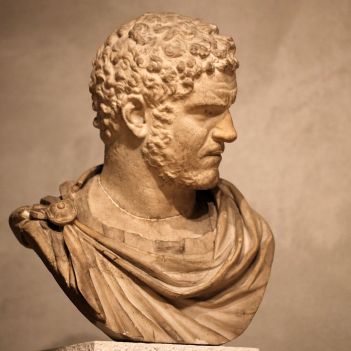 Caracalla was the son of Emperor Septimius Severus and ascended to power along with his brother Geta. However, the two sons had never got on and had developed a burning hatred for one another over their formative years which only intensified as adults. When Caracalla and Geta became co-emperors they decided to divide the palace into two halves: such was the pettiness of the men. It was only a matter of time before one killed the other and after numerous attempts from both siblings it was Caracalla who finally triumphed in the most shocking way: he had his men murder Geta in front of their mother!

Once Geta was out of the picture Caracalla had all memory of him erased from history by the Senate, statues destroyed, and his followers slaughtered. It is estimated that 20,000 people fell victim to this condemnation of memory.

Edward Gibbon, the great 18th century historian of Rome and writer of The Decline and Fall of the Roman Empire, referred to Caracalla as “the common enemy of mankind” whose reign was characterised by “rapine and cruelty”. And for good reason. Caracalla spent little time in Rome, choosing instead to imitate his hero, Alexander the Great, with conquests in Africa and the Middle East. He reintroduced Alexander’s by-then obsolete military tactics and persecuted the philosophical followers of Aristotle because a legend had it that Aristotle had Alexander poisoned.

A theatrical satire of his excesses and defence of self-defence against his brother was staged in Alexandria. Caracalla did not appreciate being the butt of the joke and arrived to the city in 215 where he promptly had the delegation of leading citizens slaughtered before setting his troops to loot the city for several days.

Caracalla was stabbed to death whilst urinating by a soldier who was incensed that Caracalla had failed to promote him.

Maximinus Thrax ruled the Roman Empire from 235 until 238 and is often blamed for causing the “Crisis of the Third Century” (a fifty-year period in which the Roman Empire nearly collapsed under the combined pressures of invasion, plague, civil war and economic depression).

Maximinus was, by all accounts, a huge man, well over 6 feet tall, perhaps even 7 feet or more and came from lowly birth in the Roman province of Thrace (parts of modern Greece, Turkey and Bulgaria). As the commander of the Legio IV Italica Maximinus was thrust into power by the soldiers under his command after the assassination of Emperor Severus Alexander.

The new Emperor did not trust anyone and intended to extract the people’s love from conquest and expansion. His first campaign was against the Alamanni people of Germania who were of no threat to Rome at the time. Maximinus’ armies crushed the Alamanni, but at great cost to the army and the people felt no love for this. He continued his conquests against people who had not instigated any ill feeling towards Rome. This was seen as a very un-Roman thing to do as they believed in “Just War” and not war for the sake of it (or so they liked to believe anyway).

In order to pay for his wars of expansion, Maximinus Thrax heavily taxed the populace and only ever showed concern for the soldiers, whose pay he had increased greatly.

A revolt began in North Africa, setting up two claimants to the throne, which was supported by the Roman Senate. In response, Maximinus marched his exhausted army on Rome who were unable to break through the gates of the city. The Praetorian Guard finally had enough of Thrax and stabbed him in the back.

The Rest is History

One thought on “5 Terrible Roman Emperors”